There are several related but distinct applications available through the Chemhacktica website. These applications and their corresponding use cases are listed in the table below.

Generally, the website takes target compound inputs as SMILES strings, although there are some compounds for which the common name (aspirin, ibuprofen, etc.) can be entered in the input window and converted to a SMILES string automatically. For more information about SMILES strings, click here. Compound SMILES strings can be obtained by first drawing the molecule of interest in ChemDraw, selecting the molecule with the selector tool, right-clicking, and choosing 'Molecule', 'Copy As', and finally, 'SMILES'. Alternatively, much of the website also supports drawing compounds of interest directly. This can be done by clicking the Draw links adjacent to input text fields, where applicable.

The interactive path planner uses one-step retrosynthesis tools to identify precursor molecules that can be combined to generate a target compound via a single reaction.

In addition, a minimum plausibility may be specified. The plausibility metric represents the likelihood that a pair of candidate precursors can be successfully used to generate the target compound under any set of conditions.

The one-step retrosynthesis tool generates a list of recommended precursor pairs shown on the right side of the page. The pairs are rank-ordered based on the scoring function specified by the user. For each pair, the following information is displayed:

The Tree Builder is used to identify precursor molecules that can be combined to generate a target compound via a series of reactions (a “tree”). This is a multi-step retrosynthetic planner.

The tree-builder produces a rank-ordered list of recommended synthetic routes. Compounds that are buyable are outlined in green; those that are not are outlined in orange. Between each target compound and its retrospective precursor(s) is a number that specifies the number of examples of reactions in Reaxys that support the template(s) that was (were) applied to make the proposed disconnection.

You can store the results of an expansion and review them later. To do this after an expansion is complete, scroll to the top of the website and click the "My Results" tab in the navigation bar. In the list that appears, click the “Save this page” link to save your results. From this list, you can also access results that you have saved previously (to do this, click "See saved results" instead of "Save this page").

Additionally, once a retrosynthetic expansion is performed, the user has the option to ban a chemical or reaction that appears in the tree if it is, e.g., known to be patented. Then, the user may re-run the expansion to obtain recommendations that exclude the chemical(s) or reaction(s) that were deemed undesirable. The list of compounds and reactions that you have banned can be accessed by clicking the "My Banlist" link in the navigation bar at the top of the website. For more information, see the Example below.

A set of proposed synthetic routes to the compound Fluconazole is easily created using the default tree-builder settings. To get started, click the Tree Builder module option (accessible from the Modules drop-down at the top of the Chemhacktica website). This will bring up a field where you can enter the SMILES string of your target (in this case, Fluconazole):

When you enter Fluconazole’s name or SMILES string in the "Target compound" field, the various algorithm settings appear, along with the parsed structure (which you should confirm is correct): 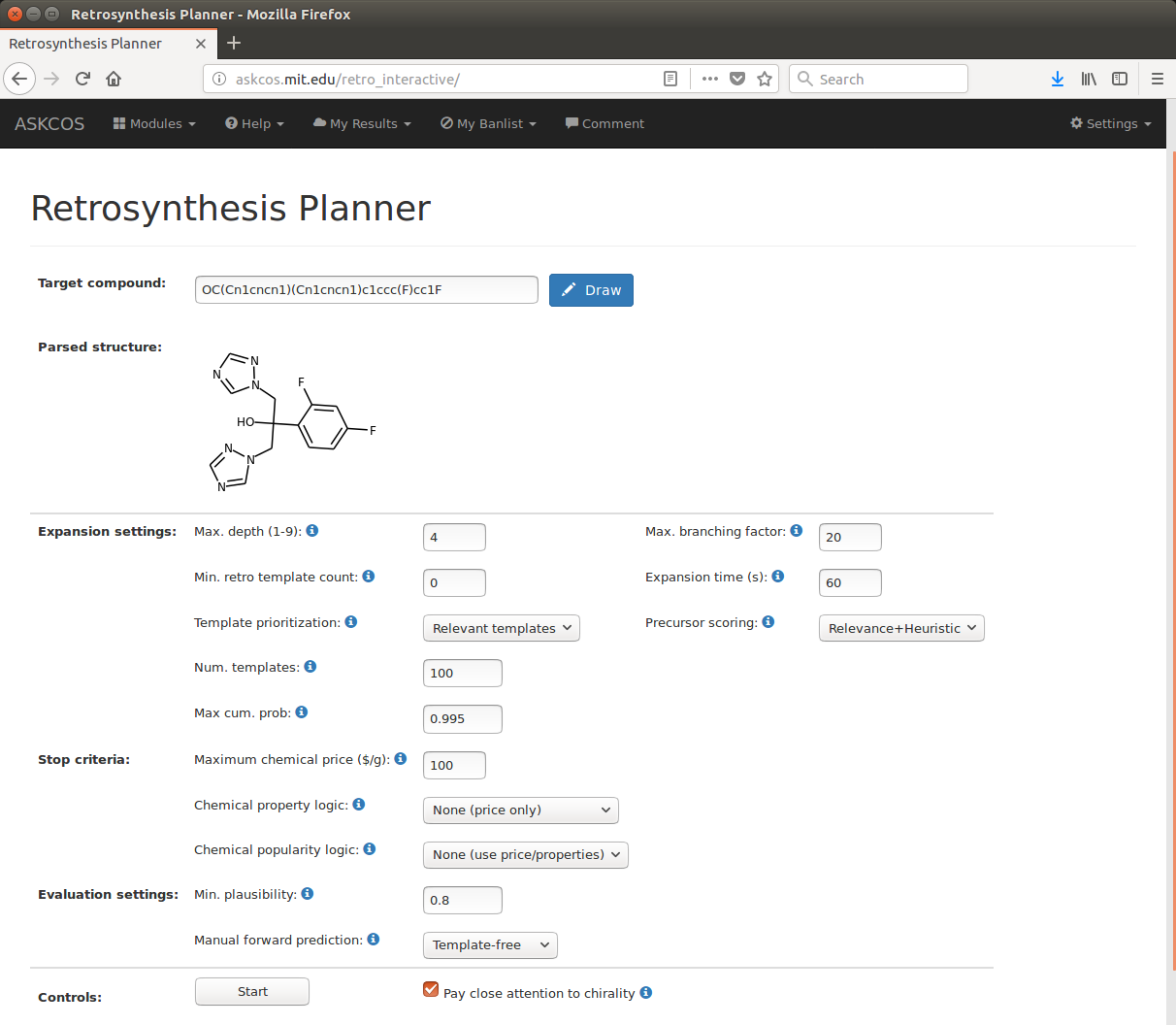 The first recommendation in the list of synthetic routes is Fluconazole itself, because it can be purchased for less than the maximum chemical price that was specified as part of the stop criteria. Since Fluconazole is commercially available, it is outlined in green:

The second option is a linear synthesis consisting of two reactions. The epoxide intermediate is outlined in orange because it is not buyable: 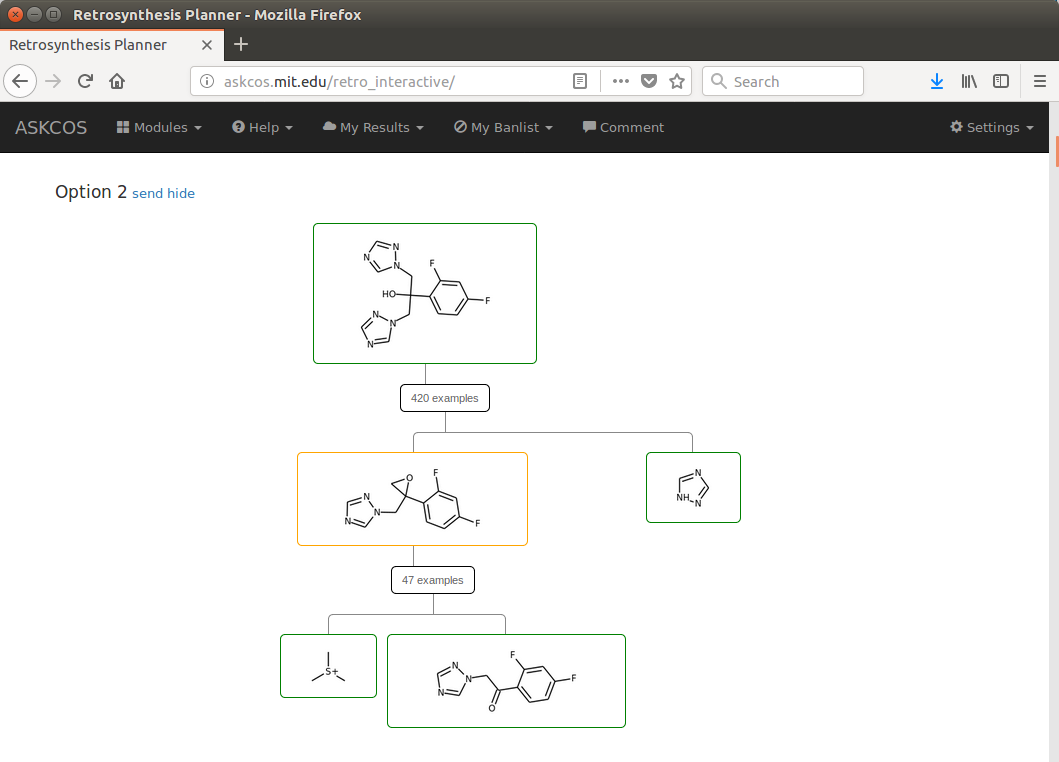 Hovering over each of the compounds pulls up a pale-yellow window with additional information, including the compound’s SMILES string, frequency of appearance as a reactant or product in Reaxys, and the options to “ban” or “hide all” (see Tree Builder - Output). For compounds that are commercially available, the price per gram is listed (non-purchasable compounds show the words “not buyable”). For example, for the non-purchasable epoxide intermediate: 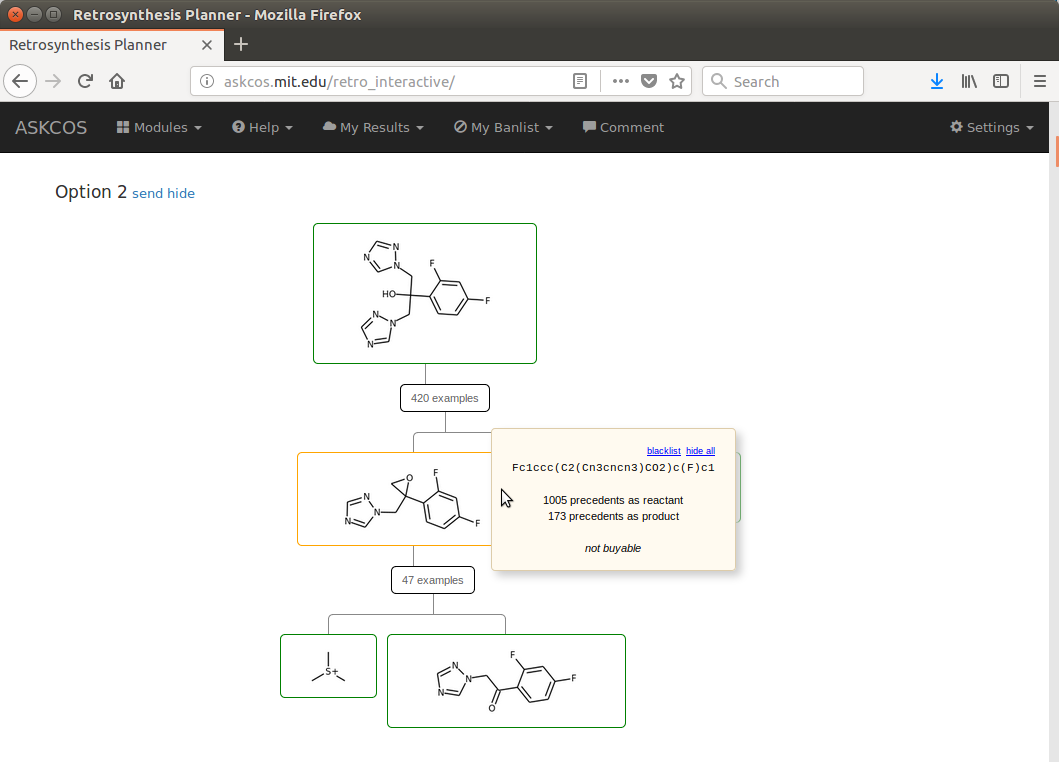 As described in Tree Builder - Output, compounds and reactions may be banned, if desired. To do this, for example, for the epoxide intermediate in Option 2, mouse over the compound, and click the ban link in the pale-yellow window that appears. Another pop-up will appear with a text field where you can specify the reason for banning the chemical (for your records only). After you click OK, another window will appear, confirming that the compound with the specified SMILES string was banned. Click OK again.

To review the compounds and reactions that you’ve banned, scroll to the top of the webpage and click the "My Banlist" tab. You will be taken to a new webpage that shows a list of the chemicals you’ve banned. For now, only the epoxide intermediate appears. You have the option to temporarily disable compounds on your banlist by clicking the checkmark under the Active column on the left; you may also permanently delete compounds on your banlist by clicking the trash icon under the Delete column on the right

Now that we’ve banned this chemical, it is possible to return to the Tree Builder tab and rerun the Fluconazole expansion. This time, none of the trees that the algorithm recommends will contain the banned chemical.

There are four different models that are used in various stages of the workflow described below. Only one version of each model is currently available, however we are always training and testing new models that may get added in the future

The context recommender produces a list of recommendations for reaction conditions. Each recommendation contains a subset of the following features: reagent, catalyst, solvent (1 or 2), and temperature. We define reagents as compounds that do not contribute heavy atoms to the product. In some cases, the distinction between a reagent and a catalyst in Reaxys is ambiguous, such that the distinction between these categories in the recommendations may be ambiguous as well, although data cleaning has been performed to help mitigate this. Note that the context recommender will not produce an error if the proposed chemical transformation is not achievable via a single reaction.

The forward predictor produces a list of candidate reaction outcomes that are rank-ordered by a probability score that reflects the model’s confidence that each outcome will appear. The probabilities for a set of candidates should not be interpreted together to comprise an expected product distribution, nor should an individual probability be interpreted as an expected yield; rather, a probability for a given outcome purely reflects the model’s confidence regarding whether or not that compound will appear at all (the model is not trained on specific yield-related data).

The impurity predictor produces a list of common types of impurities that could form given the reactants, products, and reaction conditions.

NOTE: Clicking "Submit" should launch your email client to send us an email. If this is blocked for some reason, please include the above information in an email you compose separately to askcos_support@mit.edu.